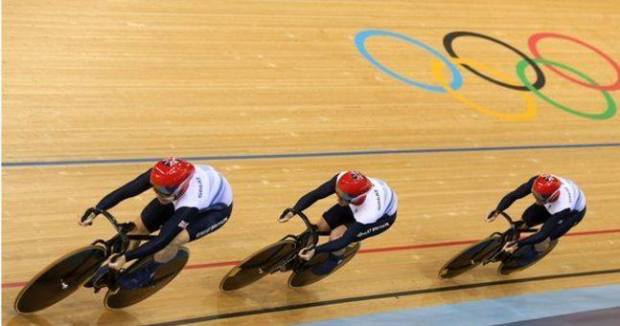 In this picture, which cyclist is going fastest? Most will say the cyclist on our left is going the fastest and the one on the right the slowest.

There are, however, unanswered and unanswerable questions that make it impossible to know. Did they start at the same place? Did they start at the same time? Are they moving forward or backward? Are they moving? I’ve seen sprint cyclists stand still during a race. Even if it’s a normal 1-2-3-Go! race, it’s possible the guy on the right is going the fastest and the guy on the left the slowest at the moment the image was shot. Catching up, slowing down and switching positions are normal parts of all races.

The initial guess was made on a made-up simplified explanation to a complex and unanswerable image.

In cognitive psychology, “attribution substitution” is an automatic subconscious process that the mind uses to make speedy decisions needed to function, but that contributes to many cognitive biases, misperceptions and visual illusions. It is a heuristic, or mental shortcut, used when someone has to make a make a judgment about a complex, ambiguous situation and substitutes a more easily solved situation.

The substitution is done at the automatic subconscious level and the person does not realize he or she is actually answering a related but different question. This helps explain why many individuals can be unaware of their own biases and even persist in the bias when they are made aware of them.

An example is when you judge the intelligence or beliefs of a stranger by his or her looks, fashion, age, race, sex, accent or nationality. Determining a person’s intelligence and beliefs is a complex question and must be done at the closely examined person-by-person level. However, even those who claim they don’t, make automatic judgments from their stereotypes (simplified generalizations) before they’ve talked to the person or even when shown a picture. As said, this is an innate automatic process.

I didn’t say the work can’t also be trite and silly.

“DO YOU BELIEVE IN GOD?”

Answering this question “Yes” or “No” is an example of attribution substitution.

God (and I’m not making a statement there about whether or not God exists or my personal sentiments) is impossible to define. Even theologian know and say that ‘God’ itself is just a human-made word, and God is beyond human definition, language and conception. Asking if someone ‘believes in God’ is, as my professor dad would phrase it, is a non-question. One hundred different people have 100 different incomplete and subjective definitions and conceptions. Thus, all the person is actually answering is if he believes in the existence of his personal definition or conception of God which isn’t and cannot be the true or accurate depiction of God. You can’t believe in what you don’t know. Two of those people may say Yes to the question, but, as their definitions and conceptions differ, they do not believe in the same thing.

In short, belief in God (as a real thing, rather than an artificial conception) or belief that God doe not exist is a question that is impossible for a human to answer. The question itself is nonsensical or a “non-question,” as it’s asking for an answer as to the existence of something that question doesn’t and cannot define.

From the ebook Philosophy of Artificial Intelligence

Religions come in a wide variety of beliefs and systems. They are human centric, about human relations and connections with higher powers or transcendent realities. They are attempts to answer the big human questions: “What is the meaning and nature of the universe?”, “What is a human’s purpose and place on earth?”, “Where did humans come from and what happens after they die?”, “How should humans act?”, etc.

There are two basics aspects of religions. One is the structure, dogma, texts and spelled-out belief. These often give the specifics of the beliefs, rules of conduct, the required ceremonies, social and community order. Even if a religion involves insight into a transcendent reality, its structure is in part formed by its culture, language, time and place, politics and circumstance.

The major second aspect is the mystical mental attempt to become closer to God, the universe, transcendent reality or whatever is their belief is the ultimate power and being. Often in the form of an altered state mystical experience, this was usually the genesis of the religion, while the dogma is constructed in response to that.

Not all religions are theistic. While Abrahamic religions believe in a single god, Buddhism is atheist and believes in higher, transcendent reality. Similarly, Hinduism believes in a greater reality or intelligence (Brahman), and many ancient aboriginal religions worshiped not a god but a greater life force (such as American Indians’ ‘Great Spirit’) or a mystical, enlightened sense of reality.

Whatever is the perceived higher power or transcendent reality, all religious people try in some fashion to become closer to it. Catholics try to have a personal relationship with Jesus and their God, while Buddhists and Hindus try to gain enlightenment. All religious have their mystical traditions and subgroups, and some religions, such as Buddhism and the mentioned aboriginal religions, are seen as essentially mystical.

Artificial general intelligence, computers with sentience, superintelligent cyborgs and transhumanism would upset the order and beliefs of religions that have strict dogma and ancient scripture that says humans are the ‘highest’ being on earth and the only one with sentience and souls. Many religions are against humans ‘playing God.’ Many religious people will be against AGI, and may be one of the influences that slow it and affect its nature. Many government policy-makers, industry leaders and people who vote are religious or are influenced by traditional religious cultures and beliefs.

Artificial intelligence will find new information, perspectives and insight that will contradict or conflict with religious sacred texts and dogma, just as Darwin’s and Copernicus’ findings contradicted centuries old Christian scripture and beliefs. There will remain the hardcore believers no matter what the new facts and insights. However, the new facts and perspectives will cause shifts in these religions and prompt many people to leave these religions. In the modern age of scientific discovery and reason, many have left the Abrahamic religions or, as with the Jews, become secular, while the religions and the believers have been been changed by science and new views. Many Abrahamic believers follow science and believe the world is round and the sun in the center of the galaxy, while many denominations have changed their views and practices surrounding women, race and the environment. Some Christian and Jewish denominations have ordained women as ministers and rabbis, something that was unthinkable just decades before.

Download for free the book Philosophy of Artificial Intelligence