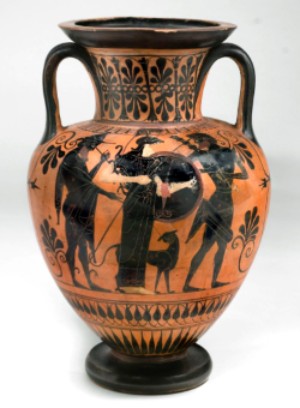 Thermoluminescence Testing (TL) is an advanced scientific method used to help date ceramics, clay, lava and some bronzes. It measures the accumulation of natural radiation in the item since it was last fired at high temperature, such as when ceramics were originally made or during a volcano eruption.

Depending on the conditions, it has a margin of error of about 7% to 50%. However, even at the high margin of error, it is still useful in determining if a vase or ceramic figure is really ancient or a modern fake.


The science of thermoluminescence testing
Most natural minerals, such as the quartz and felspar contained in clay and ceramics, have the property of thermoluminescence where they retain energy from natural radioactive decay in and around the mineral. The retained energy is in the form of trapped electrons. The energy naturally increases at a steady rate over time. Raw (unfired) clay in the ground has had an accumulation of this radiation energy from millions of years.

Knowing the annual rate of thermoluminescence accumulation in the material, the time since the original heating can be calculated.  This means that, with the margin of error, it can be determined how long ago the ceramic was made, or the lava was formed by the volcanic eruption.

The simple equation for this is:
Age = accumulated themrolominence / rate of themoluinensce gain per year

Though this sounds straightforward, there are the mentioned margins of error.

In the ideal situation– such as when the item is taken directly from the site of an archaeological dig or where there is original dirt still affixed to the object– other objects and surrounding dirt and clay can be taken for testing comparison. In these cases, the margin of error is at the low end: say 7-10 percent.

However, some items are tested without any original material for comparison, and this raises the margin of error.

Further, there are environmental and other causes that make the equation’s rate of accumulation time line less than linear, raising the margin of error. Exposure to heat, light and x-rays (such as at airports or during conservation) can make the line less linear.

The experts at the thermoluminescence labs will take all these and other issues that can affect the margin of error, and discuss the issues with you.

Other problems and issues in thermoluminescence dating
There are a number of issues that must be taken into consideration, including attempts by forgers to trick the system.

The test requires that small samples are taken from the item, though they are usually taken from inconspicuous areas and the spots can be neatly restored afterwards.

Some forgeries involve putting together separate pieces.  A piece can be made from different ancient parts, or a combination of ancient and modern parts.  A commonplace forgery involves putting a modern fake on top of an ancient base from a broken piece.  This is problematic, because the testing samples are often taken from the inconspicuous places, such as the bottom.

Some forgeries are modern carvings made out of old material, such such as carving a figure out of ancient Chinese brick.  Even though it is a forgery, the thermoluminescence test will say the carving is old, because the material is old.

This is why it is ideal to take samples from different parts of the object, and thermoluminescence testing should be used in conjunction with other tests and examination including a historian’s stylistic analysis and historical knowledge, x-ray/uv/ir examination to identify any restoration or alterations, looking for alterations to patina, and looking for glue or adhesive where parts are affixed together.

Spectroscopy can identify modern added materials, alterations to patina, and has been demonstrated to be useful in identifying items recently reworked from old material.  Spectroscopy identifies chemicals and compounds at the molecular level.  With an unaltered ancient item, the outer surface should spectroscopically test different thant inner parts, as the outer layer is altered by years of exposure to the elements, often gaining a patina.  If the outer layer and inner parts measure identically by a spectroscope, that suggests the material was carved recently.

Since the test is destructive, porcelain, should not be thermoluminescence tested except for very special reasons.  This test is usually only done for porcelain in cases such as court dispute or insurance valuation for a broken piece.

Some have wondered if forgers will try to beat the test by artificially adding thermoluminescence by their own heating. However, experts consider this type of deception far fetched because getting the right “date” would take great technical expertise and expensive equipment that only advance laboratories have.


Getting an object thermoluminescence tested

These tests are done in a laboratory with expensive equipment and trained scientists. There are numerous places around the world that do this testing, often universities, but also a number of private institutions. Amongst the most prominent testing sites are: